Here is the current state of my suitcase modular synthesizer. 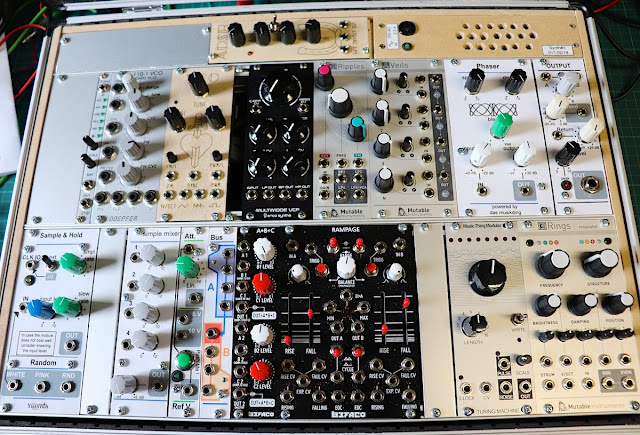 With only 2 rows of 84 HP (plus a couple of modules on the side), it does not look very impressive.  Anyway, with two oscillators, two filters, four VCA and the bottom row full of CV modulators, it can still be put into good use.

Here is my first take on what is called a Krell patch.  You'll find the patch detail below.

It is a single mono track, directly recorded into Reaper with some delay and reverb to give a bit more volume.  It's an assembly of two parts of a longer session.

It is self generated.  There is no sequencer, just a bit of manual parameter change here and there.

The sound is reminiscent of the soundtrack from Forbidden Planet.  The Krell are the extinct race of advanced beings of the planet Altair IV.  Hence the name of that style of auto-generated music.


There a two voices.

First a drone voice : saw wave from Mammouth VCO into Ripples, modulated by Rampage envelope and the output of the sample and hold.
Second : square, triangle and sine from Doepfer VCO mixed into Erica Synth VCF; Band Pass output goes the VCA, then Rings; resonance and cut-off frequency of the filter are modulated by a mix of the two Rampage envelope.
Both oscillators receive pitch CV from 2hp tune fed with the output of the Turing Machine.

Here is my first approach to document that specific patch. 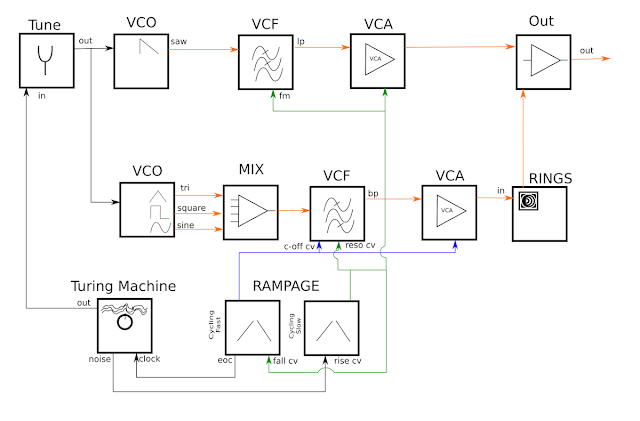 Now that I got rid of my DIY-101 based on Doepfer DIY, I'm back to a one filter configuration.   And that filter, Ripples, does not have a high pass output.  I was in need of a new multimode voltage controlled filter and I chose Erica Synth Multimode VCF kit.


This is another straightforward kit.  It is rather dense, despite being comprised of two boards.  The kit comes with three bags of parts : one for each board then there is the traditional potentiometers and jacks.


The documentation (online, once again) is heavily illustrated and pretty complete with schematics and placement files.  No step by step instructions though.   Just photos of boards at various steps.

Boards are dense but perfectly labeled.  I noticed a single mistake : boards label called for 51k resistors and I received 56k (or was it the other way around ?).  I reckon a 10% difference is no problem.


One oddity though is the fact that the boards are so heavily packed, they felt the need to solder the electrolytic capacitors upside down on the control board.  Two of which have to be bended parallel to the PCB because the main board will be above them. I put some insulation tape between the board and the capacitors despite the fact there is no indication to do so.  Better safe than sorry.

These capacitors have to be soldered the last according to the manual.  But I would rather put them after the standard parts and before the jacks and pots : once they are put in place, it is quite full.

Anyway, here it is, mounted in the synth.  That first row is now nearly set.


I do not have any 2 HP blank.  A clear oversight from my side.  I now have that small 1cm gap between the Mammouth VCO and the Erica Synth VCF.  It is supposed to be filled later with a 2 HP multiple.

So, here is a small piece of sound from the synth as it is.

Two tracks recorded live from the modular. Each track is sequenced by one channel of the Korg SQ-1.

So now that I decided to relegate my DIY-101 module based on Doepfer DIY in a box, it is time to say farewell.  I previously wrote that I will certainly regret the filter.  This is why.

The following track is entirely based on the Doepfer DIY filter.  There is no other filter involved.  All sounds are produced by the modular, except the drum part (909 samples) and an overdub on the pads (Korg Polysix emulation).
The base of the track is made of a single PWM output from the Doepfer A-110-1 VCO, into the Doepfer DIY filter.  Each of the filter output (LP, BP, HP) is treated in a different path and recorder separately.
Low pass takes the role of the bass, band pass gives some overtone and high pass gives the high pitch percussions.


The Korg SQ-1 sequences the lot.  There is a single sequence in two modes : zip of 16 steps on intro, and bridge, 2 lines of 8 steps (one for low pass, one for high pass) for the verses and outro.  High pitched percussions are driven by the Turing Machine, hence their random aspect.  Filter frequency is driven by two envelopes and manipulated by hand as well.

Wind effects are pink noise from the Random module to Doepfer DIY filter, mixing HP and LP before going to the VCA.

Lead synth is a mix of saw and square wave from Doepfer A110-1 VCO through Doepfer DIY filter.  Portamento courtesy of Befaco Rampage.

Pads are a mix of the modular and the addition of pads from Polysix emulation from Korg Legacy Collection, with heavy use of chorus.