Maybe you followed this blog for a while and wondered why I didn't write more about the Doepfer A-110-1 Standard VCO that is shown on some photographs.
Or maybe you don't care.

This module is the first module I bought new  It's also the first I fried : I plugged the connector in reverse during one of my trials, before I have a case.

The module began to act odd.  Plugging its output to Rings input halted the later.  It became very hot.
I stopped everything and began to investigate. 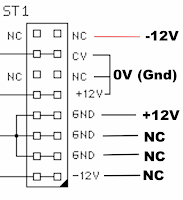 -12V pin of the module connected to an unconnected pin of the bus board, presumably close to ground voltage.  Gnd pin was at 12V and 12V pin at 0V.   I headed to the A-110 service manual from Doepfer to find out which parts could have been stressed.

I spotted two components that would certainly suffer to be powered in reverse (inversion of the 12V and gnd pins) : the CA3046 transistor array (IC3) and the 78L10 10V regulator (IC5).

I reckoned the two TL074 op-amps wouldn't have been stressed as they were powered between 0V and a floating voltage that would most certainly be close to 0V.  I removed them and tested them on a breadboard : they were OK.

I also checked the TL431 Reference Voltage and it gave me the proper 3V it should.  So it was OK as well.

Maybe other transistors were stressed but I have no idea how to verify without desoldering them.  The plan is to change the CA3046 and 78L10 first and test the module.


After some difficulties to get a CA3046 (they are reported as obsolete in DIP14 package by main distributors) and de-solder the 78L10 (I guess my de-soldering braid was oxidized), I finally replaced the two parts.
Et voila.  A quick check at the oscilloscope showed all outputs seemed fine.  Maybe only these two components were affected after all.

Finally, I re-calibrated the module, following the service manual, skipping step 1 though (too complex).


I can finally use my VCO.  End of the story.