Three years ago, when I started this blog, I wanted to share my experience of making a modular synthesizer. First in English only, the blog contained electrical schematics and technical explanations. A few months later, I decided to create a French version to share this journey in the world of modular synthesizers with more people around me. The French version contains less schematics and more sonic illustrations. The articles are pretty much the same, but the two blogs are not 100% identical.

This is the 36th article on this blog. I kept on with my goal to publish one article per month on average. Some months were more prolific than others though.
The blog has now more than 19000 views and 10 comments. 21% of the audience comes from the USA.  The most popular article is the one on the Output module with 1200 views. 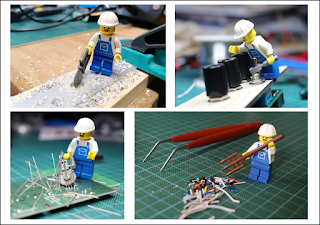 Since August 2018, Bob, a little Lego figure, accompanies me on every article about building something.  Initially relegated to cleaning tasks, Bob was able to show some skills in drilling or module tuning.  His small size makes him a valuable partner for delicate work. 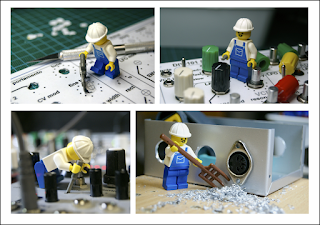 There were so many evolutions between the first family photo in September 2017 where my first modules are finally assembled in a 3U Eurorack synthesizer row beginning and now with almost two finished rows of 84HP.  The synth includes, from top to bottom from left to right, One ADSR envelope generator, one CV quantizer, two oscillators, two filters, four VCA, one phaser effect, one output module, one sample & hold with noise generator, one slew limiter, two attenuators, a mixer, a voltage reference, a double multiple, one chaotic modulation generator, a signal multiplier with CV offset, a double modulation generator, one random generator and a resonator. 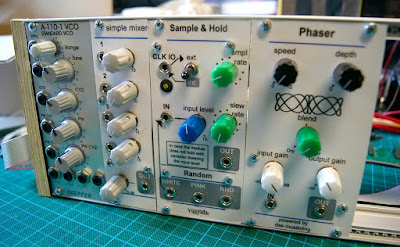 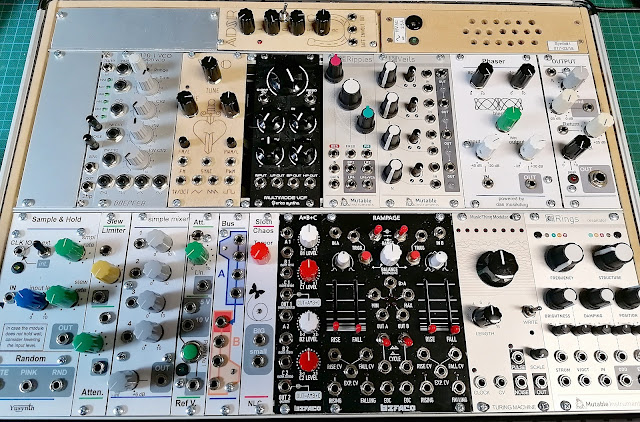 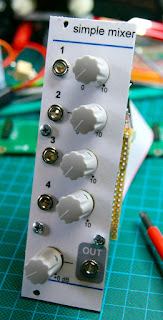 Some of the big steps are detailed here below : 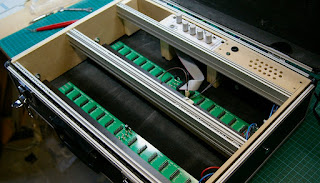 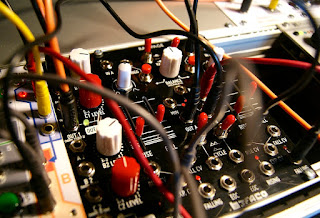 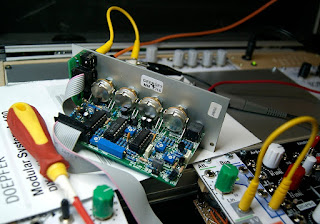 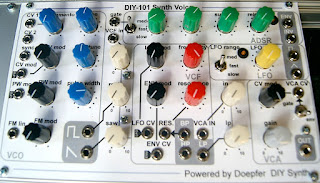 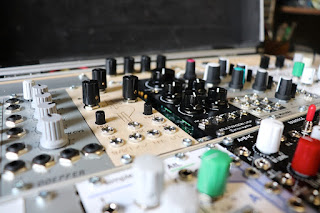 
I learned a lot on this journey into the world of do-it-yourself synthesizers.
First of all, I improved my brazing technique.  I can now make denser builds than before.
I've learned how to design module panels.  I also tested and approved new suppliers, such as Thonk.
But more importantly I learned how to use the synthesizer, how to use it to create generative music, how to create different types of sounds.

And here is the track of the day :

All sound from the modular synthesizer.  Too many tracks to detail them all.
Most tracks were performed in a very traditional way for me : first writing and recording a MIDI track, then programming the synth sound and recording the audio using the Korg SQ-1 sequencer as a MIDI to CV converter.  Exceptions : drums were made using the SQ-1 as the sequencer and percussion were generated by the Turing Machine.
DAW : Reaper