So I got Beads.

Not the decorative string of pearls, the Eurorack Module from Mutable Instruments.

To be more specific, Beads is the last design from Emilie Gillet, founder of Mutable Instruments.

Beads is a revisit of Clouds, maybe the most successful Mutable module.

I always thought I'd get one one day.   Alas Emilie discontinued it more than 3 years ago.  Beads development took more time than expected, which created frustration and anticipation among Eurorack aficionados.

Beads, as Clouds, is dubbed a "granular texture synthesizer".
Basically, Beads samples its input continuously and creates tiny bits of sound or grains.
Up to 30 grains can be created and processed.

From the manual :
One way of picturing how Beads operates is to imagine a tape loop, on which incoming audio is continuously recorded.

Every time you request a grain to be played (in reaction to a trigger, a button press, periodically, or randomly), a new replay head positions itself along the tape.

If this replay head doesn’t move, the audio will be played back at the original pitch and speed, but if it moves closer to, or further away from the record head, the signal will be replayed at a different speed and pitch. This replay head has its own amplitude envelope, and it will leave the tape once the envelope has reached a null amplitude.

Now imagine up to 30 replay heads flying along the tape. Imagine you can stop the incoming audio from being record- ed on the tape so that all these little replay heads can freely move along and gather sounds. And there’s a reverb…

The module manipulates the density, size and shape of grains, as well as the time and pitch of the replay.  In certain modes, this is a reverb, or a delay, or both.
Grain density can go up to audio rate, creating new sounds in the process.

I thought it would make a great addition on my most ambient patches.  And with 14HP, it perfectly replaces my home made phaser effect module.

Here is a small example of a drum loop made with the synth going through Beads in the Sunny Tape audio quality.
First you hear the sound unaltered.  Then Beads comes in progressively.   Grain seed is in sync with the drum sequencer.  You first notice the reverb as grain density start from very low. Then the grain density increases.  With small grains and low density, you hear the individual grains.
I play a little bit with some settings and go up to 100% wet on Beads.
Finally, I select the random mode for grain seeding and I slowly bring back the unaltered sound in the mix.

Here is the full patch : 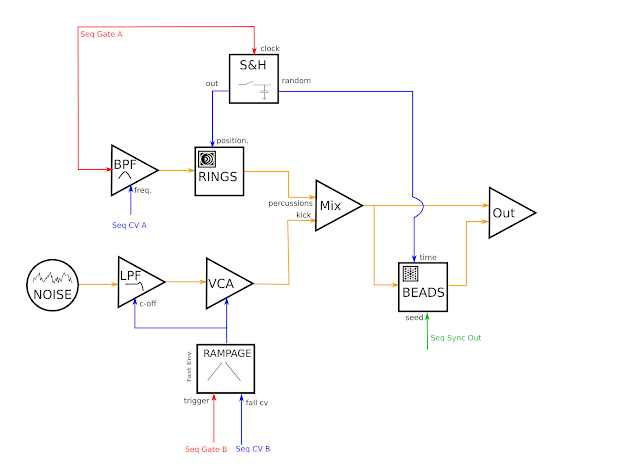