Guitar effect in a Eurorack module

To add effects to my modular synthesiser, I had the idea to buy some guitar effect pedal kits and design the necessary adaptation circuit to include them in a Eurorack module.  One need some sort of adaptation to go from 12V to 9V power supply and to lower the audio signal level : from max 20Vpp to about 1 Vpp.   I reckon most pedals might take a line level input, so at least a ten-fold attenuation (-20 dB) was needed.

I chose some kits from Das Musikding as I knew already they are high quality : a Chorus and a Phaser, as planned.
I decided to start with the Phaser.
Indeed, assembling the kit was a breeze.

Then I started to design the adaptation circuit.


My original idea was to have a simple dry-wet passive potentiometer with a buffer before and after.  But the attenuation in the middle position was too much.  It was good enough when used statically thanks to the boost of the second stage but you couldn't go smoothly from dry to wet.

Then I tried with having two different volumes knob, one for the dry signal, one for the wet signal and mix both.
But it wasn't the feel I was looking for.  I wanted a traditional dry-wet knob.

I finally stumbled upon this schematics from R.G. Keen.  It was spot on what I was looking for.


The power supply uses a simple serial line regulator.  The implementation principles are very well explained on Sonelec website.  I chose to use an LM317 because I had some in my drawer.  These LM317 in TO92 package were a mistake in an order I made previously.  They were sitting in my drawer ever since as they can only draw 100mA.  Now is the time to put them into use.
A LM7809 would have been better suited for this job.   Some might even argue that the added components (3 resistors, 1 capacitor) are more expensive than an LM7809, but it's another story.

I wasn't too sure about the potentiometer and jack places on the panel.  So I made a cardboard mock up before punching holes in the aluminium panel.  I intend to use this technique later with the Doepfer DIY synth.  So I'd better learn.


I used PCB connectors for the link between the two PCB.
But this time, I opted to solder wires from the lower side of the PCB to the pots and jacks, instead of using  connectors.
Note the plastic feet glued on top of the centre pot : the pedal PCB extended over it so I had to avoid unwanted contact between the two.

I cabled everything wrong at first : input on output, potentiometers the wrong way.  Every time it was possible to make a mistake, I did one.  It was a nice and clean way to connect the jacks and the pots the first time.  It was a pain to change afterwards.

Moreover, after having cabled everything, I had a more thorough look at the oscilloscope.  I decided to modify the circuit.  I removed the original 1uF capacitors in the signal path as they were eating all my low end.  Original schema might be nice for guitars, but not for the extended audio range of a synth.  I also added the compensation capacitors on both op amps, because they tended to oscillate.

Despite my early efforts on the breadboard, I didn't notice or take too seriously both behaviours.

Un-soldering and soldering parts with the circuit so tightly attached to the panel controls was a pain.  PCB connectors would have been handy.
I really need to make up my mind about them.

Final circuit and layouts are available here below.   This time, I correctly oriented the power connector. 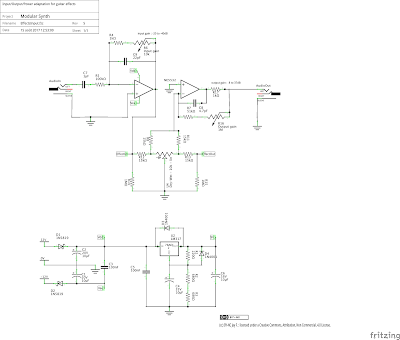 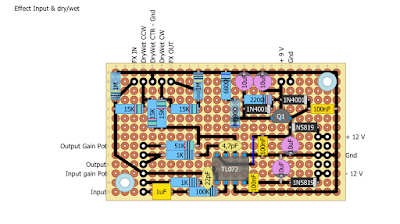 I used Fritzing for the schematics because I thought it would permit me to smoothly go from schematics to breadboard layout.  Schematic capture is OK.  But the breadboard module is not as usable as DIYLC, so I ended up using the latter for the layout.

A bit of work for the panel marking …

… and here is the finalised module. 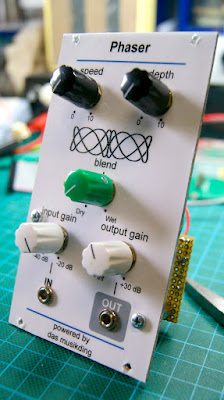 Measurement confirmed my hypothesis.
At the highest settings, with a 10Vpp input, full dry, the output stage saturated gently.  Expected : at maximum gain, the circuit would go a bit higher than 22 Vpp
But when the output stage was at minimum gain, I expected a voltage drop of -40 dB : down to 100mVpp.  I saw … 0 V at the output.   Strange.  I certainly once again overlooked a detail.

Anyway, I have more than enough gain dynamics.  I was fed up with debugging this circuit.  That would do for now.  I updated the front panel to acknowledge that particular behaviour.
at September 01, 2017