In a chaotic system, tiny variations of the initial conditions lead to apparently random states of disorder.  A chaotic circuit in a modular synthesizer is the promise of slowly changing, never repeating ambient soundscapes.

This module produces two different, very slow, chaotic CV signals. It is my implementation of the Non Linear Circuits Sloth Chaos.  I chose the regular version with 1 cycle every 15-20 seconds.  Depending on component values, other versions include Apathy (about 1 minute), Super sloth (15-20 minutes) and Stasis (about 1.5 hour !).

I needed to accommodate the values to match what I have on my drawers.  I tested on a breadboard to see if little changes on some components values would make a difference.  It turned out that yes, it does make a big difference.  It looks like there is a pretty good balance between the feedback and the small signal, going to the integrator for the big signal.  The torpor potentiometer plays with that balance.  But go with 20% more or 20% less resistance on that path and you end up with either two synchronous, though out of phase and saturated signals, or two chaotic but very small signals.
The butterfly pattern on the oscilloscope is called a strange attractor (or Lorentz attractor) and is the plot of the two signals out of the circuit, each one on a different axis.  When the signals are roughly in synch they form an ellipsis.  Two wells of pseudo equilibrium are visible.  The signals spend a bit of time there before drifting apart.  None of this is predictable and highly depend on initial conditions.  Hence the chaotic nature of the circuit.

I also made a small change in the original schematics.  I wanted to have the LED be less than a negative/positive indicator and follow the signal a bit more.  So I chose the output of the buffer after the small signal output instead of the output of the following opamp.


The main board is really cramped.  Those 1uF capacitors were bigger than expected.   I really had to be very cautious on some connections.  It's a little bit of a mess at times, but I'm quite happy with the result.

After some minor corrections to both the layout and the wiring of the boards, I finally got the familiar chaos attractor pattern on the oscilloscope.

Torpor potentiometer does not have a lot of effect.  Tough it seems to me that the signals are spending more time around a stable state (i.e well) when the pot is maxed out.

Rythmic gate from TAL Filter 2 and reverb from Voxengo OldSkollVerb in Reaper.

No VCA was harmed during the making of this piece.

This seems to put a close to the bottom row of the synth suitcase.

Next in line is a simple slew limiter associated to a passive attenuator.

Nothing fancy.  No CV control.  No choice of slope.

When I removed my DIY-101 module, I lost the portamento on the oscillator.  Mind you, I seldom used it, because the VCO was not good enough.
Nevertheless, it is an effect I fancy on an analog oscillator.


The slew limiter circuit is inspired by Yves Usson own Dual Gated Slew and the simple schematics from Synovatron.  Components value were constrained by what I had on my drawers at the time.

The attenuator is a simple passive one. 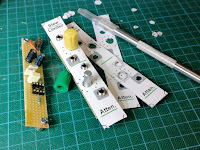 I changed the way I wired the panel.  In fact, I don't wire it anymore : pots and jacks are soldered on their own PCB, with the main board attached via spacers.  I'm not sure it spares connection wire but it is cleaner on the panel side : no more screw.  On the other hand, I have to be very accurate with my designs and my drilling.  I did three paper prototypes before finding the correct positioning of things.

Thonk proved a good resource to find the appropriate parts.


Finally, here is a small sonic example.  The effect of the slew limiter on the pitch CV of the oscillators can be heard after 16 seconds.