The second kit from Befaco I built is the Rampage.

And it is not for the faint of heart.

I chose this module as an alternative to Make Noise's Math, one of the most recommended module in forums.  With some exceptions, Rampage fills the same roles.  Moreover, it is available as a kit which fulfills my desire to build my synth as much as I can.


According to Befaco website :
"The module is built around two voltage controlled integrators. Integrators (also known as Lag Processors or Slew limiters) allow you to process your voltages, converting sharp square waves in ramp-like waveforms.
These lovely devices can, for instance, convert a gate signal into a simple envelope, or achieve a “portamento” or “glide” effect when applied to pitch CV."

With a kit of that size and density, you have to be systematic in order to make sure to be "good first time".  Debugging such a circuit afterwards was not in my intentions. 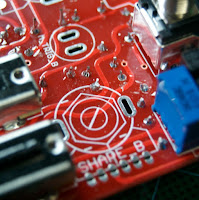 I estimated that the two Schottky diodes of the kit were too large for the PCB footprint and I replaced them by some in my stock.

I also found an oddity in the presence of a solder joint below one of the potentiometer.  I reckon there should be enough room between the back of the pot and the joint when the pot is tightly attached to the panel, but I decided to mask it anyway with some insulation tape. 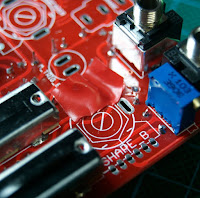 Still, I implemented the mod presented in this Muff Wiggler thread to ensure reliable gates by soldering 1M pull-downs resistors at the outputs.


Finally, a photograph of the Befaco boys in action and a bit of sound.

Here above, Rampage channel A is programmed as an LFO which frequency is determined by the output of the S&H and cadences the patch.  Channel B is the envelope triggered by channel A and whose attack is also determined by the ouput of the S&H.
A*B+C plays the role of the VCA.   The sound source is the pink noise from the S&H module.
The sound is coming out via Rings (whose parameters are, ... guess what ? ... controlled by the output of the S&H) and the phaser.
Additional effects : NI Supercharger, TAL Reverb II & LoudMax
at May 31, 2018 No comments:

To complete my synth, I recently bought 2 DIY kits from Befaco.

The first one is called A*B+C.


The kit is  good quality and rather simple.


The A*B+C is a dual, four-quadrant multiplier with VC Offset.

It can perform different operations on its inputs :
- amplifier and inverter of A input.
- VCA on A, with envelope CV on B.
- VC offset generation with C input.
- attenuation/inversion of C input
- ring modulation of audio signals in A and B.

Moreover, the output of the the first channel is normaled to the mixer of the second channel.  So the module can serve as CV/audio mixer.


Assembly instructions are good but could have been clearer, especially for the final assembly.
A couple of photos wouldn't have been too much.  But I didn't encounter any major issue.

My only gripe was about some parts that had a larger size than their footprint on the PCB.  I had to replace the two Schottky diodes with those I had in stock and solder 2 couples of resistors vertically. One resistor even had to be soldered on the other side of the board.

Once again, nothing major in my view.


Finally, the module suffers from a high level of background noise as indicated in this Muff Wiggler forum thread.   Anyway, it does not seem prohibitive.   There is a suggested mod but it looks like it modifies the potentiometers behaviour, so I didn't want to perform it (and I didn't have the necessary 1/8 W resistors).   Time will tell.
at May 11, 2018 No comments: