Even if most mixers are able to cope with the typical audio voltages a modular synth work with (around 5V peaks), professional line level is defined as typical at +4  dBu (or 1.7 V peak).   So it can be good to have an adaptation module with a bit of attenuation and an output buffer capable to drive the line from the synth to a mixer or an audio interface.
Moreover, using 6.35 mm jacks is more practical to interface with external gears than keeping 3.5 mm jack.

I got inspired by Make Noise's Rosie : cross fader between A and B inputs, send and return functions and the attenuation stage to match line level.

Make Noise chose to have the levels of the send-return at modular level, to use with effects in the modular synth itself (like their own reverb module).   I decided to go with variable attenuation and gain in the send-return path to be able to use it with external effects like guitar pedals.
As a result, the return jack can still be used as a third potential input for the module, but it might need some attenuation beforehand in order to match the levels of the A-B inputs.


The electric schematic is an assembly of three circuits, with slight modifications.

First, the crossfader at the input comes from the panner schematic from R.G. Keen.  I modified the resistors value to match the resistors and the potentiometer I already had.
Second, the output stage is the output stage from Dintree Output mixer.  I removed the R69 resistor to better match my target output level.
Third, the send-return circuits are Ken Stone's stomp box adapter with variable attenuation and gain.  I removed the 10uF capacitor in the return feedback loop as it created an potentially audible high pass filter at minimum gain.


And here is the final layout.  I had to correct a couple of slight mistakes but other than that it went smoothly.

I elaborated my gain chain to have +4dBu (around 1.7 V peak signal), if I enter a 5 V peak signal on one input and keep level potentiometer at two third.

As there are three op-amps in the audio loop, I made sure they were all in an non-inverting configuration to avoid phase inversion.

I added a peak detector as a simple comparator followed by a rectifier, a filter and the diode.  Classic.  This will detect peaks above 5 V (or 5 dB below the +18dBu clipping level) on the positive side only, but that will do.
Why this value ?  I first decided for a much lower 1.8 V peak.  But I reckoned it was far too low and that I should target a value around +12 dBu.  I decided to change a single resistor and I only have that 15k instead of the needed 12k.


If you're interested in the relationships between V, Vrms, dBu, dBV, I found this very useful website : http://www.sengpielaudio.com/calculator-db-volt.htm

The panel is one of the most cramped I had to do.
Notice the small id tag denoting this is my 20th DIY project.


Wiring was a mess.

8 HP was a fine choice.   But for the future, I have to resist the temptation to cram as much function as possible into the available space.

I first wanted more vintage look knob caps, but they were too large and I switched back to traditional copies of Davies 1900H.

Finally, here it is in it's natural habitat.

This module combines in 4HP some utilities I first planned for a 2U utility panel.

From top to bottom : a passive attenuator, two reference voltages and a manual gate.

The attenuator and the gate are normalled to the 10V reference voltage.

The reference voltage electronic schematic is scavenged from the same function in Mutable Instrument Shades.   Hence the reference to Olivier Gillet, whose work is a great source of inspiration for me.


Some of the components are soldered on the panel.
I hesitated to include the 51 ohms protection resistors at the op-amps outputs.  Maybe I should have put them inside the feedback loop of the op-amps ...  Nevertheless, the  circuit was built when I thought I might add them and I did not want to  ruined my earlier work, so they ended up on the panel.

The op-amp went into smoke as soon as I began the first test : I had inverted the -12 V and + 12 V pins.  :-(
I resorted to solve it with some trace removal and a couple of wires.


So no layout this time : i'm too ashamed.  :-/
Still, here is the final electrical schematic.

The next DIY modules

My next two DIY modules are simple utilities.

I started with a passive multiple.  I called it 'bus module', somehow inspired by the CV bus from Make Noise.

The jacks are cabled in parallel in two groups of four, the second one is normalled to the first one.

Without a plug in the first jack of the B bus, the module behaves as a 1:6 multiple.  And with the plug in, the module is two 1:3 passive multiples (or two bus of 4 entries).

So if it is passive, what is the electronic circuit for ?

The small electronic circuit is used to visualize the signal that flow through the module via two LEDs, one for each group.  They are red/green LEDs, green shows the positive side of the signal, red the negative side.  I got that idea from the Make Noise's CV bus.  The implementation is inspired from Mutable Instrument's Links.

The second module will be the subject of the next post.

In the mean time, let's see if the beast is alive... 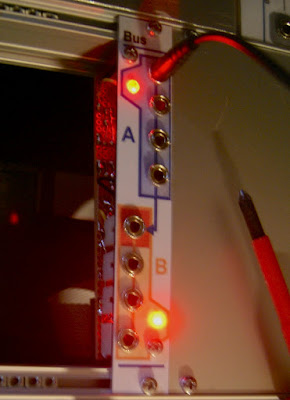